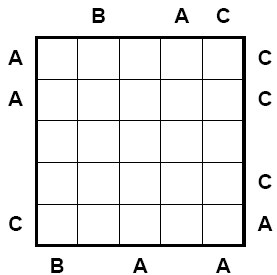 Our ABC Logic puzzle magazine has 52 brand new ABC puzzles and ABCD puzzles for you to enjoy. ABCD puzzles work in the same way as the ABC ones that we'll work through here, but are on a 6x6 grid with an additional letter, D, to place but all the same rules apply.

If you've not played ABC puzzles before, then this work through shows you the sort of logic that you can use to solve these fun little logic puzzles. Take a look at the grid to the right. The first thing you see is that some rows and columns have letters at the start/end of them. These tell you that letter is the first you'll encounter (or the last if at the end of a row/column) in that region. If there are no letters at the start/end of a column, then you will have to work it out based on the rule that each row has A,B,C and two blanks precisely.

How do we start with this logic puzzle? The most systematic way is to go through and mark each cell with A,B,C, and 'X' which we will here use to denote a blank since a space ' ' isn't that useful online.

In an ABC puzzle we know that wherever we have a letter at the start or end of a row/column, that letter cannot occur in the last/first two cells of that region. So, in the first row we know that an A comes first. Since there are a maximum of two blanks allowed in a region, then we know the farthest cell the 'A' can be in is the third cell in the row - at Row 1 Column 3 (R1C3). This means that the final two cells cannot contain an A. And of course we know that the cell immediately next to a letter must either be that letter or a blank. So if we were marking out the first row we would have these possibilities, with ',' denoting a break between cells:

We can quickly write in the entirety of column four in this puzzle. The first cell must be a blank. The second cell must also be a blank, because again we know that the 'A' in row two must be in the first two cells as there is an 'A' at the start of row two. This only leaves one place for the 'A' in column four as we have now used up the two blanks it must be in the third cell in the column. This leaves B and C to be placed in cells four and five in the column. Now, we know that the 'C' in row five must come in one of the first three cells in that row, therefore meaning the 'C' can't be the final cell in column four. Thus we can place the column fully as:

As soon as we start placing values in an ABC puzzle we can then start to use sudoku logic to eliminate those values from other cells in the same row and column and progress from there.

Often working through in this way is the only logic that you need to solve ABC puzzles, though some of the trickier puzzles will require you to study carefully the various combinations that are possible and make deductions from these. But these strategy hints and tips above will give you a good start with even the harder puzzles. And you'll never need to guess and there will only be one solution to each puzzle. Once you start on them we think you might get hooked on this enjoyable little puzzle, so...