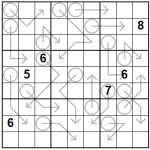 Welcome to the Sudoku Variety Magazine, or sudoku variants magazine. This magazine contains a range of different sudoku puzzles, and features ten puzzles of ten different sudoku variants. Some of those variants are more popular than others, so whilst you will be familiar with some, there might be others you are not so familiar with. Some of the variants listed below do not appear anywhere else on this site.

So what are the sudoku variants? The list below outlines what the variants are, with brief rules about how to play that particular puzzle type:


To view a sample of the first page of the magazine, please click to view Variety Sudoku Magazine page 1 (opens in new window).

The magazine contains 25 pages of puzzles, with four puzzles on each page. There are then solution pages that contain 8 puzzles per page. We hope that you will find the magazine enjoyable, and particularly enjoy those variant puzzles that you will not have come across before. If you are coming to sudoku variants for the first time, then you might like to start with the more straightforward variants like sudoku X first before moving on to the others.

Like sudoku variations? You can play ten new sudoku variant puzzles each and every day at the Puzzle Connoisseur's Club, including fantastic new variants such as Sandwich Sudoku Online. This exciting new sudoku variant has numbers around the edge of the grid, and these tell you the sum of the numbers between the 1 and 9 in that row and column. For instance a total of 0 means that the 1 and 9 are adjacent, whilst if the total is 4 then you know that either 149 or 941 appears somewhere in the region, since without the 1 being available the only way to make a sum of 4 is with a single digit. Likewise if the total is 5, then the region must contain the 2 and 3 in some order between the 1 and the 9.
In terms of difficulty, the hardest will be the arrow sudoku, calcudoku, isosudoku and sudoku minus. With the sudoku minus being noticeably harder than the sudoku plus and sudoku times, it is recommended to make a note of the various combinations or ways of making each number for the first puzzle that you solve, so that you can refer to these when solving the other nine puzzles.

To download the Sudoku Variants Puzzle Magazine in PDF format on A4 paper to print off the puzzles you want when you want to play them, click the 'Buy Now' button below, all for just £1.97 (UK Pounds) or $3.15 (US Dollars):