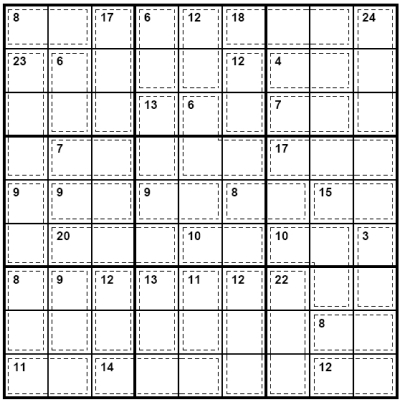 But for the uninitiated, the starting position of a killer sudoku puzzle with givens at all can strike fear into one's heart (or at least appear intimidating). Let's look at some tips that can be used to help solve these puzzles using the first puzzle in the magazine, to the right.

The easiest way to get started with killer sudoku is to look for sum cages that have only one possibility. Then, you can eliminate those numbers from the other cells in the affected region(s), limiting their options and combining them with standard sudoku rules to help you solve the puzzles.

A quick scan of the grid reveals that we have a '6' made from three cells starting with the cell R3C5 (which means third row, fifth column), so those three cells can be marked with 1,2,3 as the options straight off. We also see a '3' from two cells starting at R6C9, so those two cells can be marked with 1,2. We now know where the 1,2 must be in column 9 and therefore know none of the other cells can contain it. Similarly, the '24' off three cells starting at R1C9 must be 7,8,9, and this time not only can 7,8,9 be removed from all other cells in column 9, they can also be removed as options for all the other cells in the third 3x3 box.

This shows another very simple piece of logic that can be used to help solve killer sudokus. Although we don't know the order in which the 4 and 6 are placed, either way round the sum total is the same: 10. This means that R1C6, which completes that cage of three cells, must contain 18 - 10 = 8, so we can place our first number: the 8.

Because this is actually quite a simple puzzle, we can continue with this logic throughout the puzzle to gradually whittle down the options and solve the puzzle.

Another rule that can be used to solve killer sudokus is called the rule of 45. Sometimes you have to use this rule to make progress without guessing in killer sudoku, at other times it just speeds up the finding of numbers that will eventually be revealed by other logical methods.

The rule of 45 can be applied to rows and columns too, of course, not just 3x3 box regions. Incidentally we could have used this rule as an alternative method to find that R1C6 must be an 8: can you see how?