Please note these are downloadable PDFs. If you prefer to purchase a physical Book of Jigsaw Sudoku Puzzles, please visit our Jigsaw Sudoku Book page 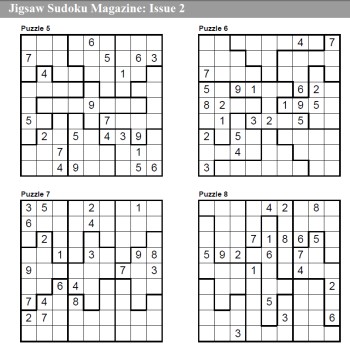 Jigsaw Sudoku are a fun and popular variant of the standard sudoku puzzle. Whilst in normal sudoku the puzzle has regular shaped box regions of dimensions 3x3, in jigsaw sudoku these nine regions can take all sorts of interesting shapes. There are three issues of this magazine available to purchase.

The result is a striking looking puzzle with interesting snaking regions that fit together like the pieces of a jigsaw, and hence the name of the puzzle as jigsaw sudoku. It is also sometimes referred to as jigdoku and in some other places as irregular sudoku because these nine regions are not of regular 3x3 dimensions.

The key to being able to solve jigsaw sudoku successfully is to remember to use the shapes of each region to make as many deductions as you can. Because of the interesting shapes of jigsaw sudoku, it is possible to create puzzles with far fewer givens than an ordinary sudoku puzzle. This is because the shapes of the regions can interplay to give you more information (and therefore restrict the value of more cells) than is possible with regular sudoku.

In terms of difficulty, many people find jigsaw sudoku harder than orthodox sudoku, although you can use all the standard and familiar solving rules to help you solve the puzzles. This collection contains 100 all new jigsaw sudoku puzzles with a range of different grid patterns on A4 paper ready for you to download and print off in PDF format. The magazine has 50 pages, the first 25 containing 4 puzzles per page and the remaining pages containing the solutions. You can download page 1 of Jigsaw Sudoku Magazine here.

Never tried a jigsaw sudoku puzzle? You can try a sample Jigsaw Sudoku Online here. If you prefer to play puzzles online rather than in print, you can also play thousands of online puzzles with a membership to the Puzzle Connoisseur's Club.

If you'd like to watch a video of how to solve jigsaw sudoku, this video walks through the solution to the puzzle linked to in the green box above:

Sandwich Sudoku Rules
A lovely sudoku variant, sandwich sudoku gives you hints around the edge of the grid as to the location of the 1 and 9 in each row and column. This video explains the rules so you can have a go at this fun but tricky variant...

If you'd like to try this puzzle before watching the video then you can do so here: Sandwich Sudoku Puzzle

We've just added (May 2012) a brand new second issue of jigsaw sudoku magazine, which contains another 100 jigsaw sudoku puzzles for you to enjoy: