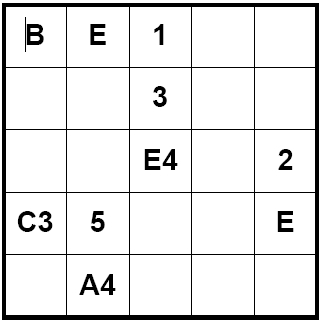 Graeco-Latin Sudoku is an interesting sudoku variation that you could argue gives you twice the fun of an ordinary sudoku puzzle!

This magazine contains 100 5x5 Graeco-Latin Sudoku puzzles in it. We have tested a range of sizes and believe this size offers the most fun for this particular variant.

Therefore the rules are to place each of 1 - 5 and A - E once in each row and column. In addition, each of the 25 combinations from A1 through to E5 also appears just once in the whole puzzle. This adds an interesting twist on the solving logic and at the same time means that 5x5 is about the right size as you don't want to waste your life storing and logging 81 possible combinations to whittle through as would be the laborious case with a 9x9 version of this puzzle! But having 25 as in the 5x5 puzzle feels about right.

If you ever get stuck whilst solving these puzzles, you have probably missed an application of the interesting logic that results from this uniqueness rule. Look at the sample puzzle to the right. The third cell contains an 'E' but what number does it contain? Well it can't be 1 or 5 from the row/column, but also E4 is already placed in the grid, so it can't be 4 either. It must be 2 or 3 therefore. Often you will find there is only one cell that can have a particular combination, and therefore you can place it there. As you go through fully resolving the number and letter in a cell, it is good practice to go through any incomplete cells and make any possible resulting eliminations there and then.

Why not have a go at the sample page of Graeco Latin Sudoku Magazine and see whether you like this puzzle type or not: if you do, then you can download a magazine containing 100 of this novel variant below.

To download the Graeco-Latin Sudoku Puzzle Magazine in PDF format on A4 paper to print off the puzzles you want when you want to play them, all for just £1.97 (UK Pounds) or $3.15 (US Dollars) - click the 'Buy Now' button below: