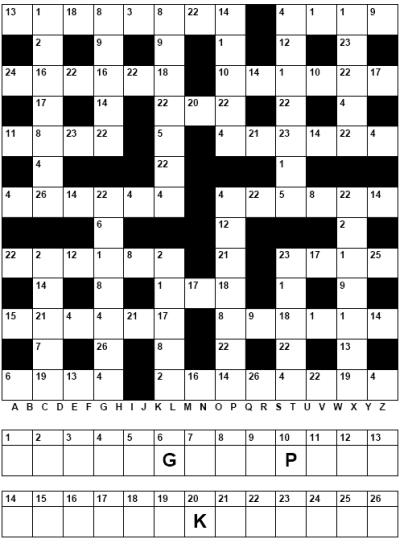 Currently we don't have a magazine of codecracker puzzles, however it is a popular puzzle and therefore we wanted to add some simple strategy tips you can use when solving code cracker puzzles. Of course, we have many other great puzzle magazines for you to enjoy!

A code cracker is often described as a coded crossword puzzle. In order to play the puzzle, all you have to do is work out which letter of the alphabet is represented by each number from 1 - 26, and then place that in the grid everytime that number occurs. Sounds simple? Well, they can often be quite tricky.

The key thing you need is a good command of the English language, as codecrackers often contain more obscure words, and sometimes even phrases and proper nouns rather than 'ordinary' words.

The most obvious tip is to go through and write in the start letters straight away. Use the cross-off grid to keep track of which letters you have placed so that you don't accidentally place more than one letter at once. Sometimes the starting letters will give you a tip off as to a word straight away, but not always.

You can use letter frequencies for the most common letters in English quite often to work out what must be what. The three most common letters in English are E, T, A in that order... so the number that occurs the most is almost certainly one of those three in most cases. Since many words have the same letter more than once, a strategy is to look for the multiple occurrences and work out whether it could be a vowel or a consonant; this can often help you whittle down the options too. Some players like to try 'E' every time for the most commonly occurring letter then regress if it is wrong, so another solving tip is: use a pencil so that if you make a mistake then you can easily rub it out and start again.

As mentioned above, there are some patterns that are much more likely to have a consonant than a vowel, so bear this in mind when you are solving the puzzle. If you don't mind a little electronic help, then online wildcard search tools that let you enter letters such as "A??A?A" and return answers like "armada" can be really helpful in suggesting words to you and letting you see how many words fit a pattern - but of course some players do consider that cheating so it is up to personal preference whether you want a little electronic assistance or not.

Remember that when you find the Q, you virtually always find the U too - right after it! There are other sets of letters that often go together, and many that never go together. Typically many consonant-consonant pairs at the start of words don't exist - e.g. words starting 'ck...', 'dt...', 'fg...' and so on don't exist, so when you have a consonant as first or second letter in a word it often means there is a vowel, or perhaps an 's', preceding it.

By using simple tips like this you can usually make good progress with solving a codecracker puzzle, and hopefully eventually work through to the solution. Just be careful particularly with the less common letters: whilst if a letter only appears once it is almost certainly one of the more obscure letters, like K, Z, Q, J, just sometimes the compilers will catch you out and it will be a more common letter!

Finally, bear in mind repeated numbers as these often reduce the possible words considerably. Look at the first across set of cells in column 3: it has 24-16-22-16-22-18: this has a distinctive pattern for the middle four letters: 16-22-16-22 which is a pattern A-B-A-B... how many letter combinations can you think that repeat like this? Do you instantly know that at least one of these is a vowel?

And those are the code cracker solving tips! Why not now purchase a puzzle magazine from one of the great selection of puzzles we have here at Puzzle Magazines?