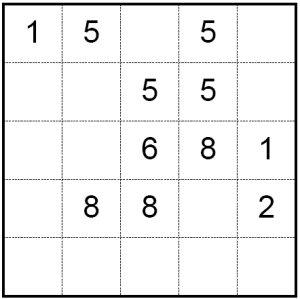 The chances are quite high you won't have come across many, or possibly any, fillomino before, because it is rarely seen in print. This is a shame since it is a really fun puzzle. You can see an example of a small puzzle to the right which we'll use to introduce the puzzle and solving strategy.

First things first: the rules. Fill the grid such that every cell contains a number. The finished grid is filled with a series of polyominoes of any size. In a 5 x 5 puzzle the most trivial puzzle to solve would be a puzzle with a 25 polyomino to place, since there are 25 cells then this puzzle can be solved instantly!

Polyominoes of the same size are not allowed to touch adjacently or vertically at any point; givens of the same number may belong to the same polyomino (it is up to you to work out whether they do or not) unlike a puzzle such as nurikabe where they must always belong to separate islands. Finally, not all polyominoes in the solution will necessarily have any cells marked in the start position, so you may need to add in more polyominoes. It sounds complicated, but you soon get the hang of it. And of course with a proper fillomino there's one solution you can reach with logic alone.

One of the main solving rules is to see that there are certain cells that a polyomino must contain. Look at the '8' in cell row three column four (R3C4). This must be part of an 8-omino, and therefore must extend at least into the cell below, R4C4, so this can be marked with an 8. Usually in fillomino you mark a thick border around areas of a polyomino that are defined, so you can draw a border around the 1's straight off. Marking the 8 we've just added enables the '2' in R4C5 to be completed, with the cell beneath it: R5C5, and so the thick border can be drawn in around that 2-omino, which we know as a domino.

This now means we have two cells at the start of the final column: R1C5 and R2C5 that must belong to a new region. Here we can use the rule that regions of the same size cannot touch to rule out the possibility of it being two new '1' regions. The only other option given there are just two cells is therefore a new polyomino of '2', and so 2 can be written in both these cells.

That's the end of the fillomino strategy guide! Now you can buy a puzzle magazine from one of the great selection of puzzles we have here at Puzzle Magazines.