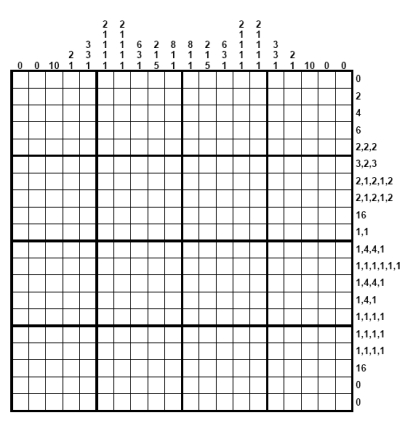 If you've just bought hanjie magazine, then you might be wondering how to solve the puzzles that the hanjie puzzle magazine has to offer!

The first thing to do is to go through the puzzle and place any regions that have all their cells instantly accounted for. Look at column one and column two - they both contain zero filled cells. So go through and place a small dot in each (or a light 'x' if you prefer) to mark those off. Many players like to also cross off the numbers at the top of a column or end of a row once they have placed all the filled cells (or lack thereof) in a region. The 0's can also be placed in the final two rows.

Although the aim of the puzzle is to work out exactly which cells are filled, it is as important to also work out which cells are not, which is why it is essential to mark cells that you know must be empty in some way: like the suggested dot '.' mentioned above.

The next thing to do is to look for regions where we can place some, if not all, of the filled cells. Look for example at row 9 in this 20 x 20 puzzle. We can see that there are 16 continuous filled cells in this region. Now, there are five possible ways that this combination can be placed in the grid. If you run through them all in your head, you will find that they all share the majority of the filled cells. That is the key point of solving hanjie puzzles: you need to look for regions where, whatever the combination, there are some cells that must be filled (or must be blank) and mark these in. So in this case we can mark in cells 5 to 16 in the row because these are shared by all possible combinations of the 16 (which are respectively cells 1 to 16, 2 to 17, 3 to 18, 4 to 19, 5 to 20).

The same logic can be applied to row 18. Often the same logic can be applied to regions that have multiple placed sets of filled cells, you just need to be a little careful when working out the possible combinations to take into account the mandatory gap of at least one cell between groups of filled cells in a region. As a handy rule of thumb, if there are over half of the cells filled in a region then you can place at least something from the start of the puzzle. To see this, look at column 3, which is size 10 is this 20 x 20 puzzle. We can't actually place anything straight off because the region could run from cells 1 - 10 in this column or cells 11 - 20: no overlap there. However, were the region 11 in size, just one more than this, that changes: can you work out which cells can be filled if column 3 were to contain 11 filled cells rather than 10?

As you make progress whilst solving, marking in cells as filled or blank, you will gradually start reducing the options for other regions too. By careful record keeping of the progress you have made and careful counting (many errors come in due to miscounting) you will gradually be able to solve the puzzles. Of course some are easier than others. But all the puzzles have a unique solution that can be reached through the use of this logic alone. You will never need to use any guessing at all when solving the puzzles, so if you do find yourself guessing then look again at the puzzle - you've missed something!

And that's how to solve our hanjie (aka nonogram or griddler) puzzles. Why not now purchase a hanjie puzzle magazine and enjoy 25 puzzles including the sample above.