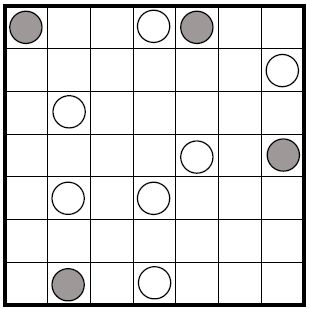 We hope you're enjoying the puzzle magazines on site, and if they've fuelled your interest in other puzzles, here we look at a rarely seen Japanese puzzle called Masyu.

The aim of masyu is to form a single loop that never crosses itself. The puzzle is composed of a rectangular grid like that seen to the right. The loop does not need to pass through every square. You'll see there are some counters in the grid, which are grey (or black) and white. These two indicate information about how the loop passes through that cell.

A white counter indicates that the loop passes straight through the middle of the cell, and must turn 90 degrees on at least one of the adjacent squares. A grey or black counter indicates that the loop must pass into the centre of the cell, turn immediately ninety degrees and continue straight on for at least one cell either side of the counter. Using these rules it is possible to reach a single solution for a valid masyu puzzle and to reach that solution through the use of logic alone.

Let's look at how to solve the sample puzzle. Look at the grey counter in the first cell of the puzzle. We know that the loop must pass into the centre of the cell, turn 90 degrees, then continue straight on through at least one cell either side. There is clearly only one way to do this, and therefore the loop can be marked as going from the middle of cell row 3 column 1 (R3C1) straight up through R2C1 into the middle of R1C1, turning 90 degrees, then extending through to the centre of cell R1C3.

So, we've established that the corners and edges are particularly useful parts of the puzzle to look at when solving masyu puzzles. The way that grey and white counters interact is also helpful in solving masyu. Look again at the grey counter in the final row; we know it extends into the middle of the white counter in R7C4. Now, we know that the loop has to pass straight through the centre of a white counter, so we can extend the line horizontally into the middle of R7C5.

Then we can use the rules of the white counters to work out the next move: the loop must change direction by 90 degrees on at least one of the cells adjacent to the white counter. Since we know it didn't move 90 degrees on the left side of the counter, then it must do on the right side. Being at the edge of the puzzle, there is only one direction the loop can move, so we can draw it extending up into the middle of R6C5.

White counters at the edges can have the way the loop passes into them marked in straight away, as the loop must pass straight through the white counters there is only one way it can travel through them at the edges of the puzzle grid. By application of the rules above and consideration of the fact that you must end up with a single connected loop, this sample puzzle is soon finished.

That's it for masyu. Why not now purchase a puzzle magazine from one of our selection here at Puzzle Magazines?