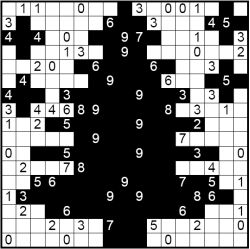 We don't have a mosaic puzzles magazine yet at the site... but we do have lots of other puzzle magazines for you to enjoy!

To introduce you to mosaic, take a look at the image to the right. Unusually this strategy guide shows you a solved puzzle. The start position is the grid without any filled cells but simply the numbers in certain cells.

The reason we've included the solution as the example in this strategy guide for mosaics is to illustrate the puzzles which many won't be familiar with: and that is to determine whether each cell in the grid is blank or filled. Numbers determine how many cells surrounding that cell, and including the cell itself, are to be filled in the solution. The end result will be an image of some sort.

So the immediate places to start are the 0's and 9's. We recommend going through putting a dot or a faint cross in each cell that must be blank around all the 0's. And with the 9's you can see that the cell itself and the eight neighbours can all be filled.

Once you've done all the easy placements whilst solving a mosaic, it is often worth looking at the edges and the corners of the puzzle. If there is a 4 in the corner or a 6 at the edge, then these can be filled straight away too - can you see why?

Key to solving many mosaic puzzles is to cross-reference the options for cells that have neighbours in common. To see an example of this, look at the first cell in row 8 and the first cell in row 9 at the edge of the puzzle, they are '3' and '1' respectively. And of interest to us here is that they share four cells, which are the first two cells in each of these rows.

Now, we know that it is only possible for one of those four cells to be filled, because the '1' may only have one neighbouring cell that is filled. As we know only one of these four can be filled, and that the '3' has six neighbouring cells in total, we know that the two cells at the start of row seven MUST be filled and so they are marked in. Similarly, we know that one of the cells shared by the '3' and the '1' must be filled, so we can put dots or crosses in the two cells beneath the 1, at the start of row 10, because we know that they cannot be filled no matter what the exact placement of the filled cell shared between the 3 and the 1.

Sometimes the restrictions between adjacent regions is trickier to spot, and often they ripple through such that once you make one deduction several others follow. Looking for high numbers that share at least some cells with low number regions can often yield quick and easy deductions; a common combination in mosaics would be something like a '6' and a '3' that share six cells between them. Take a look at the fifth cells in row 7 and row 8 for an example of this. The combination instantly allows us to place three cells as filled: can you work out which ones it is and why?

These strategy hints and tips are all that is required to solve our mosaic puzzles. You will never need to make a guess.

That's it for mosaic puzzles! Why not now purchase a puzzle magazine from one of the great selection of puzzles we have here at Puzzle Magazines?