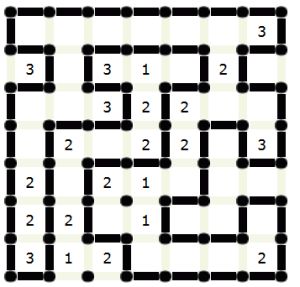 First, the rules of slitherlink for those who are unfamiliar with it. The puzzle is played on a rectangular grid, and there are dots at the four corners of each cell. Some cells have a number in them, whilst others are blank. You must draw a single continuous line that never crosses itself around the grid such that each cell that a number in it has the stated number of its sides touched by the line. Thus if there is a '2' in a cell, then two sides of that cell form part of the loop. The end result once you've solved the puzzle looks like the completed puzzle to the right. We don't have a magazine of slitherlink puzzles, but we do have lots of other great puzzle magazines available for purchase and download.

A valid slitherlink puzzle has only one solution that can be reached through application of logical rules, you shouldn't find yourself having to guess - though sometimes in hard slitherlinks you will be required to work through how the loop could continue in your head, but in a fair puzzle the dead-end if there is one should only be a few steps ahead, you shouldn't have to trial and error an extension of the loop for more than a small amount.

So, how to solve slitherlink, or loopy puzzles or loop the loopy (as they were called on the BBC's brain training experiment on their Bang Goes the Theory program)?

First, good practice. Mark lines clearly, and when you know that the loop does NOT touch one of the sides of a cell, put a small 'x' there to remind yourself the loop does not go there. Many players find it useful to put a light line through cells where the requisite number of sides have been marked so that they don't accidentally miscount when extending the line later on.

Second, the easiest rule: a '0' has no sides touched by the line, so you can instantly place an 'x' on all four sides of the 0.

The next place to look is often the '3's, as sometimes you can place the three sides straight off whilst at other times at least some sides are known.

The most obvious strategy for 3's with slitherlink is where there is a 3 next to a 0. Here you know already that one of the sides has an 'x', and that means you can mark a line on the other three sides of the 3 straight off, as 3 of the four sides must be marked and one is already known to have an 'x'.

There are various patterns to be aware of when solving slitherlink. You can work these out in your head but it is useful to be aware of them. When you have adjacent 3's in a row or column, you can mark some lines straight away. Look at the two 3's next to each column in the third column of the puzzle. No matter how these are marked exactly, the three lines in the rows: above the first 3, between the 3's, and below the second 3, must be marked, so they can be drawn in straight away.

Diagonally adjacent 3's can also each have two of their sides marked in instantly: the first time you see this combination in a puzzle you'll be able to see which those two sides are and why they must be marked.

As you go through solving slitherlink you'll find many more interesting patterns and strategies you can use. The fun of the puzzle in many cases is finding these, and whilst hints and tips could be written about each of these, such as chains of 2's together interacting in interesting ways, part of the fun of the puzzle is discovering these for yourself.

One final combination which may not be immediately obvious is, for instance, a '2' that is diagonally adjacent to a '3'. There are several instances of that combination in this puzzle. Let's look at the one at the top right of the grid. We know that the sides to the right and above the '2' cannot BOTH be marked, because that would make it possible to mark three sides on the '3'. So we therefore know that at least one of the other two sides must be marked. Spotting this sort of thing is often useful whilst solving slitherlink, and if not immediately, then it can be useful as you start solving other areas of the puzzle and narrowing things down. This combination appears several other times in this sample puzzle.

Finally you will of course sometimes need to think about the shape of the loop itself and where it can go: for instance if going down a certain route would lead to part of the loop being isolated, the loop doesn't go there. Also there is only one loop in the finished puzzle, so two small ends of the loop cannot join up and isolate themselves from the rest of the puzzle either.

That's it for the slitherlink tips, we hope you've found them useful.

Although we don't have a slitherlink, loopy or loop the loop puzzle magazine yet, we do have a large selection of other fantastic puzzle magazines to download.