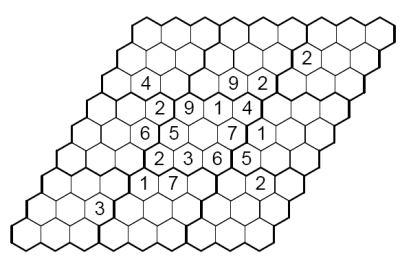 Have you recently bought, or perhaps are thinking of buying, Isosudoku Puzzle Magazine?

Some people are put off buying a very rarely seen puzzle because it might appear a little obscure or they are uncertain how to play the puzzle. So here's a simple look at the key solving methods you'll need when working on isosudoku.

You will see that there are rows, 'columns' (the nine gently slanting / shaped regions) and 3x3 bold lined regions as per normal sudoku. In addition there are the partial regions that run in this direction \ across the puzzle. These are what make the puzzle so different to normal sudoku type puzzles, other than the presentation of the puzzle with the hexagonal grid.

So when you are solving isosudoku, then infact most strategies are perfectly familiar to you, and they are the simple sudoku strategies. Just place 1 - 9 once in each of the regions and ensure that there is no repetition of a digit in the partial regions.

Thus looking for cells that only have one candidate, or for a cell that is the only place a number can go in a certain region, are still the main workhorse solving strategies to be used for isosudoku just like a normal sudoku puzzle.

As an obvious example of this, the centre cell in the puzzle must be an '8' because it is the only number left to place in the middle box region of the puzzle.

The new rule and logic that you need to use is that to do with the partial regions (all the new regions in this puzzle type are partial with the exception of the major diagonal running from top left to bottom right, equivalent to one of the two new shaded regions that form the 'X' in sudoku X.

Other than that, all regions have less than nine cells, so you will need to be careful with the logic that you apply to those. Specifically, not every digit has to appear, so if there is only one place a value can go in a partial region it does NOT necessarily mean that the digit goes there as it always does in the length-9 regions, because it might be that the number does not appear in the region at all.

So the interest comes when you CAN apply that rule, and sometimes you'll need to use that rule to solve the isosudoku puzzles in this magazine (without guessing at least). Let's say that we have a partial region containing eight cells. We know that '1' is not a candidate for ANY cell. And we also know that there is only one cell that contains '3' as a candidate. Now we CAN place the 3 in that cell, since we know that there are only eight possible numbers that can go in this region, and since we have eight cells, then each of those eight values must be placed. Note that if we did have cell(s) that could contain a 1 in the region, then we would not have been able to place the '2' immediately as it could have been that the 2 did not appear in that partial region.

So that's isosudoku for you. Why not now purchase isosudoku puzzle magazine now!