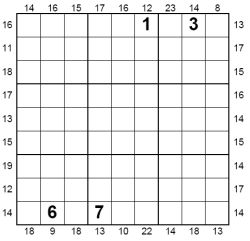 If you've just bought Sudoku Plus magazine, then you might be wondering how to solve the puzzles that the sudoku plus magazine has to offer!

There are literally hundreds of variants of sudoku puzzles. What is interesting about sudoku plus (which is also called outside sudoku in some places, but we avoid that name as it can also refer to another variant too!) is that it combines elements of sudoku with elements of kakuro, or killer sudoku.

The grid is that of a normal sudoku: nine rows, nine columns, nine 3x3 boxes. But there are many less givens. And this is because around the outside a number is given, which corresponds to the sum total of the first three cells in a row or column. As such you can visualise the puzzle as a partial killer sudoku.

Solving strategies are therefore essentially the same as with killer sudoku, or addoku. That is look for combinations that only have one option at the start, then place those pencilmarks and eliminate as options from the rest of the region.

As an example, you can see that there is a '23' at the top of column 7. So we know that the three cells beneath it must be '6,8,9' in some order or other. So mark those pencilmarks in those three cells, and remember that we've also eliminated them as options in the rest of column 7 and also the third 3x3 box.

If there are no regions with just one option, then look for those that have very few options and start to mark in the pencilmarks to reduce the options gradually.

As you work through in this manner gradually reducing the options for cells, you will be able to start placing values straight away. The more you solve the more you can start to use the standard sudoku rules such as working out the value that must be in a cell based on eliminating other numbers in the row/column/box, and seeing if there is only one cell in a region that could contain a particular number.

And that's how to solve our sudoku plus (or outside sudoku puzzles). Why not now purchase a sudoku plus puzzle magazine now and enjoy 100 all new puzzles.